loya
eBook Moderator
Jun 5th, 2020, 9:35 am
#7584405 by loya
Dangerous Friends Box Set by Jennifer Young (#1-3)
Requirements: .ePUB Reader, 951 KB
Overview: When Bronte O'Hara finds Marcus Fleming injured on her kitchen floor sparks fly - but she's a radical activist and he's a policeman. As the attraction between them grows, Bronte struggles to overcome the shadow of a past, destructive relationship and he has to reconcile his feelings for her with the demands of his job. But he's made a lot of enemies...and she has some dangerous friends. Set in Edinburgh and the Scottish Highlands, the series includes three books.
Genre: Romantic Suspense 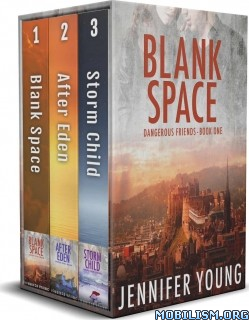 1. Blank Space
Bronte O’Hara is trying to move on from her ex-boyfriend, Eden Mayhew, but when she finds an injured man in her kitchen in the run-up to an international political summit in Edinburgh, a world she thought she'd left behind catches up with her with a vengeance. Eden's an anarchist, up to his neck in any trouble around — and he's missing. The police are keen to find him, certain that he'll come back, and that when he does, he’ll have Bronte in his sights. What does he want from her — and does she dare trust a handsome stranger with her life?

2. After Eden
Takes place in the aftermath of the violent G8 summit in which Bronte O'Hara almost lost her life. She finds herself fighting against her feelings for Marcus Fleming, the policeman who saved her. When Marcus is cleared of any wrongdoing over the deaths of three people during the undercover police operation, Bronte isn’t the only one who struggles to come to terms with the outcome. The friends and relatives of those who died are determined not to let the matter rest, whatever the cost. Some are looking for closure; some want justice. And someone is determined to use Bronte in a bid to gain revenge…

3. Storm Child
When their car comes off the road in a blizzard, Bronte O’Hara and her boyfriend, detective Marcus Fleming, stumble across an unconscious teenager in the snow. After he's rescued by two passing strangers, the boy simply disappears, and even Marcus’s police colleagues don’t believe their story — until the youth's body is found. It looks like the accidental death of a young criminal, but Bronte and Marcus are convinced that things aren’t as straightforward as they seem. Who was he? What was he doing out in the storm? Who else might be in danger? And who will stop at nothing to make sure than Bronte and Marcus never find out?