loya
eBook Moderator
Apr 29th, 2020, 8:22 am
#7471454 by loya
Rosemary Run series Box Set by Kelly Utt (#1-5)
Requirements: .ePUB Reader, 1.5 MB
Overview: The first five suspense-filled novels in Kelly Utt's popular Rosemary Run Series—now together in one ebook package! If you like domestic thriller hits such as Liane Moriarty's The Husband's Secret, Sandie Jones' The Other Woman, and A.J. Finn's The Woman in the Window, you won't be able to put down the suspense-filled Rosemary Run Series.
Genre: Fiction > Mystery/Thriller 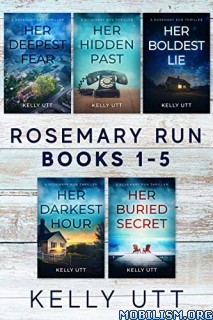 1. Her Deepest Fear
Cate Brady almost had it all. Now she's reeling from the shock of her husband's sudden death and suspects she's being followed. Is she in danger? Will she find the answers she reluctantly seeks? And what will it all mean for her future?

2. Her Hidden Past
Bea Hughes had put the past behind her. Until an anonymous caller phoned to say they knew what she'd done. Should she confess after all these years? Should she cover her tracks? And can she do it while keeping her high-profile marriage to a public figure out of the headlines?

3. Her Boldest Lie
When a decades-old letter gets mailed without Marcheline Fay's permission, the lie she told might not be enough to keep them safe. Will he come after her? How will she face his accusations without sacrificing her hard-earned business empire? And will her family ever look at her the same?

4. Her Darkest Hour
Startling situations she can’t remember and missing chunks of time send Eve Blackburn’s life into a dangerous free fall. Is she being framed? Should she tell her husband? And how will these dramatic developments affect the baby they’re trying desperately to conceive?

5. Her Buried Secret
Penelope Cline and her three closest girlfriends have a deadly secret. A woman disappeared under mysterious circumstances at a party they attended, and they know more than was reported. Should she speak up and report what she knows? Will bad things happen to her if she doesn't? And will telling the truth cost her the friendships she holds most dear?