Shadows of the Dead by Spencer Kope (.ePUB)

Schillerstrasse
VIP
Aug 25th, 2020, 5:19 am
#7814639 by Schillerstrasse
Shadows of the Dead by Spencer Kope (Special Tracking Unit Series, Book 3)
Requirements: .ePUB reader, 2.5MB | Retail
Overview: The best tracker in the world, a man with a secret and a special set of skills, must find two nearly untraceable killers before time runs out for their victims, in Spencer Kope's Shadows of the Dead.

A woman-abducted and found in the trunk of a car after a high-speed chase-regains consciousness in the ICU to reveal two crucial pieces of information: the man who kidnapped her is not the same as the man who left her in the woods, and she's not the first victim-in fact, she is number eight.

Magnus "Steps" Craig is part of the elite three-man Special Tracking Unit of the FBI. Known for his ability to find and follow trails over any surface, Steps is called in on cases that require his unparalleled skills. But there's a secret to his talent. Steps has a kind of synesthesia where he can see the 'essence' of a person-what he calls 'shine'-on everything they've touched.

Brought in to track the driver through a dense forest after the blood hounds have lost his trail, Steps and his partner Jimmy find the driver laughing maniacally, babbling about souls, and hiding a pristinely maintained box of eight posed rats. Now the Special Tracking Unit must chase two villains-through not just the real world, but the dark web as well-tracking an enemy they can't see, as time runs out for the unknown victims.
Genre: Fiction > Mystery/Thriller 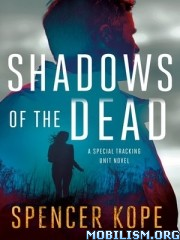 Trouble downloading? Read This.
Aug 25th, 2020, 5:19 am
No direct requests for titles please. Use request section.

Re-uploads? Only if both links are not working and only one per day (see rules)