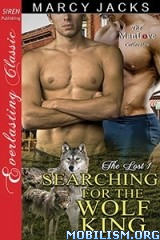 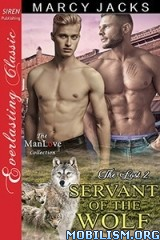 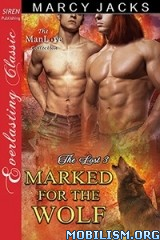 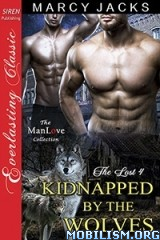 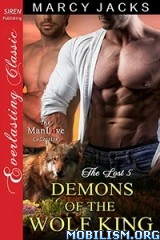 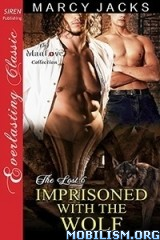 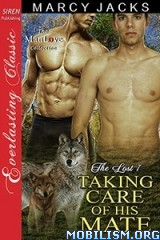 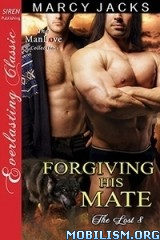 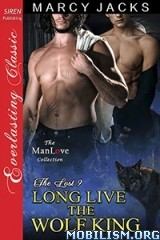 1. Searching for the Wolf King: Adam Brennan has been raising his younger brother for years. They're both adults now, but that doesn't stop Adam from worrying, or hating himself for not being able to give his brother the life he deserved. On a camping trip to unwind, all the visions and nightmares Adam had over the course of his life come true in the most horrifying way possible. Monstrous wolves attack out of nowhere, and Adam can't defend his brother. Thankfully, he doesn't need to. Dean, an alpha wolf with control, and a pack beneath him, have been stalking these monsters, and one look at Adam, and he sees the mate he lost hundreds of years ago. The mate who will help Dean to find his king. The mate he will protect from all other threats, if only Adam will let him.

2. Servant of the Wolf: Quinn Stacy is searching for something. That something has been compelling him to come to Blue Springs for a long time. After finally working up the nerve, he spends the last of his money on a bus ticket, some food, and he just goes. Quinn is cursed. He can tell who is and isn't a shifter, though shifters aren't supposed to exist. Sensing them is one thing, but he gets so damned cold when they're nearby. Freezing. Now there are shifters after him, because he was apparently another servant to the wolf king. And they want him dead. But there's one wolf who will protect Quinn at all costs. A handsome alpha, who has the power to warm up Quinn from the inside out, chasing away the cold, making him feel human again. When Quinn finds that, when he finds Luke, he's not about to let him go.

3. Marked for the Wolf: Kevin Bowles has always been able to see things. The monsters, the good guys and the bad. Nightmares that have haunted his every moment. There is one person he needs to see in real life, though. Someone he aches for on a primal level. His mate. Another monster. Brian. Brian gave up on finding his mate. He didn't deserve to have Kevin back with him, not after centuries, when Brian was forced to kill his mate to keep him safe. Kevin is here now, back from the dead after so many years of being gone, and so are the creatures who want to do them harm. If Brian is to make up for the sins of his past mistakes, he will have to do everything in his power to keep Kevin alive and safe this time around. He won't waste his second chance.

4. Kidnapped by the Wolves: Gabriel is a damned warrior. He wasn't supposed to get caught by the enemy. His mate wasn't supposed to be put in the cage across from his either. Luckily, the men in robes don't seem to know what they have, and as Evan busts them out, Gabriel must first rescue a fellow wolf before he can attend to what belongs to him, and ensure that Evan stays safe while they run for their lives. Evan Spearman came to Blue Springs to find someone. Someone he's dreamed about for his whole life. Getting kidnapped out of his motel room and locked up wasn't in the cards, but neither was the wolf. The wolf who talks. The wolf who transforms into a handsome, strong man, and tells Evan that he's safe, and how much he is loved. Lot of strange things going on in this town, but he’s willing to go along with it.

5. Demons of the Wolf King: John doesn't want a mate. He hopes he is one of the lucky warriors to not have someone waiting for him. It's too much hassle. Too much pain. He can see the happiness his brothers are having after discovering their mates, but John doesn't see that for himself. Not when there is so much work to be done. Finding Chris working as a cook in the highway bar he barely pays any attention to was as much of a surprise as realizing the man's scent and body call to John on a primal level that refuses to be ignored. Someone else refuses to ignore them as well. After biting his mate, marking him, John cannot stay. He will only hurt Chris again, but in his absence, a familiar enemy, and someone entirely new, decide to pay Chris a visit, to threaten and intimidate him, proving that the mate of a warrior can never truly be free.

6. Imprisoned with the Wolf: Michael remembers nothing before his cell. He's a monster, a prisoner to be used. An attack dog that will tear anything put in front of it to pieces. Until one day, someone is thrown into his cell with him. "Eat," his captors say. But no. Some semblance of the man he is returns. The wolf will not eat. It cannot. This is his mate. Jason is terrified. The enormous wolf in the cell with him is closing in, and they said it was going to eat him! Except...it does not eat him. It transforms into a man, a handsome man who promises Jason protection at all costs. They'll have to work together. They'll be stuck with each other for a while, but all things considered, Jason won't mind sharing a cell with this man while they work out an escape plan, so long as he doesn't end up on the menu.

7. Taking Care of His Mate: Dean is the alpha of his pack, the protector and provider for his mate and family. But the enemy has been slipping through his fingers as of late, and when his mate, Adam, makes his plans known that he wants to get a job at a local store, Dean's alpha pride cannot take the hit, especially after his brother-in-law gets hurt at his own job. Adam knows Dean tries so hard. He knows Dean has a lot on his plate, and his decision to get a job has nothing to do with that. He's not trying to hurt or insult his mate, but it seems that even an alpha needs reassurance from time to time, to prove to his mate that Adam's need to work has nothing to do with Dean, and Dean is still a capable warrior and provider regardless of Adam's decision.

8. Forgiving His Mate: Henry Miles Smith has been held against his will for years. As a human, he would be useless to wizards and werewolves had he not known how to use medicine to his advantage, to help the wizards control the wolves. Except one of those wolves is his mate, and when the time finally comes to escape, Henry's not so sure if he deserves forgiveness. Thirteen can hardly recall what it's like to be human, trapped in his wolf form for so long, he can only help his mate survive the pit, and protect him when they are both free. But Henry has a guilt complex a mile long, and if Thirteen is to care for him, provide for him now that they are finally free, he's going to have to show his mate that the past does not matter, and they can only look ahead.

9. Long Live the Wolf King: Michael wants to protect and provide for his mate, the man who owns his heart, but when he can't remember his life before being tortured and experimented on, his job options are limited. Jason doesn't seem to mind, he's happy on the ranch, but Michael can't help but feel he can do more. The sudden arrival of their wolf king, after years of searching and waiting, puts all of his plans to a halt, and causes a shift in the pack that no one can properly define. Jason's gift of making those he touches tell the truth can get him into hot water at times, especially if the King has secrets to hide. The king's return can only mean one thing. Danger is near, and if Michael is to keep his promise to his mate, then he needs to be ready for whatever is coming. From outside the pack, or within.