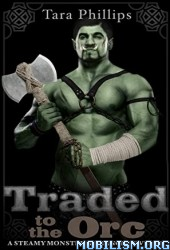 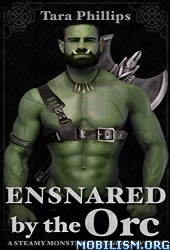 Traded to the Orc (#2)
Taryn is rescued from a vicious troll attack
But the orcs who saved her village want payment for their services
And they’ve decided to take her as their bride
Taryn’s life is turned upside down when trolls attack her village. With her crippled leg that never healed right running isn’t an option. So she hides, and prays, and fears that her end is near… but then the orcs come.
Her village is saved, but the band of orc warriors want payment, and their price is a bride. A fertile young woman to marry one of their warriors and bear their clan many orclings.
The orc who saves her is tall, scarred, and rugged. He swings an axe as easily as he attends his patients. As the orc’s healer, Gedu is determined to set Taryn’s crippled leg. As a warrior, he’s determined to prove his fitness as her potential husband.
He’ll fight in the bride battle, and prove his worth, because he wants Taryn's heart, and a baby.

Ensnared by the Orc (#3)
Ensnared in a hunter’s trap.
The orc who rescues her wants more for helping her than just her hand in marriage. Runa thought she enjoyed her simple life as the local village’s hermit. She has her cottage, her dog and her solitude.
That all changes when an elf knocks at her door and asks for help crossing the orc’s territory. When her troll hound disappears along with the elf she sets off to find her dog. When she’s ensnared in the same trap as her hound she finds herself at the mercy of an Orc hunter, the one who dug the pit. He doesn’t want much for rescuing them, only the rest of her life.
When her dog follows the orc home, Runa finds herself caught between the comfort of home and the promise of a new life.