iheartbooks77
Head of eBooks
Sep 5th, 2018, 10:41 am
#5794048 by iheartbooks77
SEALs in Paradise series by Elle James (#1, 11)
Requirements: .ePUB/MOBI Reader, 1.4 MB
Overview: Award-winning author Elle James grew up as an air force military brat. She received her work ethic from her rock-solid father, her creative streak from her artistic mother and inspiration from her writing partner and sister, Delilah Devlin.
Genre: Romance 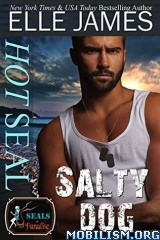 Hot SEAL, Salty Dog: A Brotherhood Protectors Crossover Novel (#1): Navy SEAL on vacation in Mexico wakes up married to a jilted bride and retraces his steps to matrimony
Confirmed bachelor and Navy SEAL Chase Flannigan is celebrating his separation from the Navy in the tropical paradise of Cabo San Lucas. After a particularly hazy night, he wakes up with a ring on his finger and a beautiful woman in his bed, and no memory of how they got there.

Stood up at the altar, jilted bride Maggie Neal snags her best friend and goes on her honeymoon, one groom short only to wind up in bed with a hot SEAL, married and extremely hungover.

Together, Chase and Maggie take a walk down a fractured memories’ lane to discover how they ended up hitched. In the process, they discover a bullet hole in Chase’s baseball cap, a drug cartel with a vendetta against them and a burgeoning love born of respect and adventure, a love they never expected to find in paradise.

** Salty Dog ** is part of the Brotherhood Protectors Series. It is also in the “SEALs in Paradise” connected series.

Hot SEAL: Hawaiian Nights (#11): Jace Hawkins (Hawk) thought he was headed home to Montana after leaving the Navy SEALs, but his first assignment as the Montana-based Brotherhood Protectors is to fly to the Big Island of Hawaii to secretly protect a cattle baron’s daughter. His goal is to keep the lady alive while pretending to be a ranch hand. The ranching is second nature since he grew up on a ranch in Montana. Protecting the daughter is where the challenge lies.

Kalea Parkman has had free rein of the 130,000 acre Parkman Ranch since she was big enough to fit her feet in stirrups. She refuses to curtail her freedom just because she’s had a couple of near-misses with a potential kidnapper. But when a mainlander cowboy hires on as a ranch hand, he manages to shadow her every move. And the man has skills…with the animals…and with her. Even though he’s as sexy as sin, he’s no less annoying.

When attempts to take her increase, the new cowboy insists on spiriting her away to a remote cabin tucked away in the far reaches of the ranch. They must rely on each other to stay alive until the threat is neutralized, while hopelessly resisting a desire that rivals the heat of the Kilauea volcano.