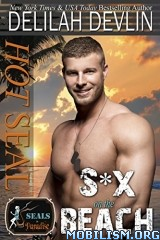 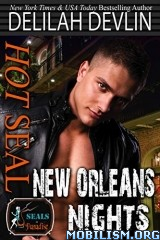 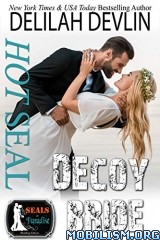 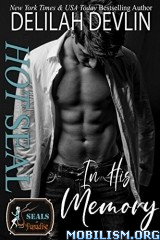 Hot SEAL, S*x on the Beach (#2): In Cabo San Lucas, Navy SEAL Carson "Beach-boy" Walsh is ready to live the good life. After surviving fifteen deployments in ten years, he bailed on the SEALs, figuring this cat had run out of lives. The only danger he faces now is choking on an oyster or drowning in beer--and then he meets her.

Gina Tripp is the Calamity Jane of bounty hunters, enjoying an unexpected vacation. She's the stand-in for an absent groom on her girlfriend's honeymoon in Cabo when she meets a cute guy with a nothing but sex on the beach in mind. As her luck would have it, her best friend winds up kidnapped, and Gina's embroiled in a dangerous rescue that deepens her attraction to Carson.

Just when she thinks she can settle in and enjoy a few days of sin, an opportunity to prove herself to her boss lands in her lap. Now, she has her sights set on scoring a huge bounty--an ex-pat skip, hiding out in Mexico. What follows is a wild ride that leaves her feeling pretty relieved she hijacked a Navy SEAL to help her with the job.

**S*x on the Beach** is part of the Montana Bounty Hunter series. It is also in the SEALs in Paradise connected series. Each book can be read as standalone. They do not have cliff-hanger endings and do not have to be read in any particular order.

Hot SEAL, New Orleans Nights (#17): The last thing this SEAL wants is to open his heart to her again, but Amelie needs the "hands on" kind of protection only he can provide...
Navy SEAL, Thibaut "T-Bone" Cyr, has a lot on his mind. The time is approaching when he'll either have to re-up with the Navy or leave. He's come home to New Orleans to spend time in his old stomping grounds while he mulls over his decision. New Orleans is where his roots are, where his family lives, but he wants to stay on the downlow while he considers his future. He's also hoping the past he left behind doesn't still haunt him. Fourteen years ago, he fled the city when the woman he loved dumped him.

Amelie Rivette is back in New Orleans, ready to start again. She's helping her blind aunt run a voodoo shop in the French Quarter, but her aunt's troubles are getting complicated. After a string of bad luck, which includes a robbery and threatening calls, Amelie finds herself trapped inside the shop when a fire is set, and she's attacked by an assailant.

Coming to the rescue of his ex-girlfriend, Thibaut finds himself torn. The last thing he wants is to relive the pain of their breakup, but Amelie needs the kind of protection he can provide. Soon, neither of them can resist their attraction, but while they reconnect physically, he holds back his heart, not trusting that what he feels is real and not some remnant of their shared past. Complicating matters is that their families are conspiring to give him a reason to stay in New Orleans.
When Amelie is kidnapped, Thibaut realizes he's still in love with her. Hoping he's not too late, he sets out to save her.

Hot SEAL, Decoy Bride (#19)(May 2020): A former Navy SEAL is teamed with a feisty ex-Marine to provide protection for a Greek tycoon's daughter to make sure the bride gets safely to her destination wedding...
Former Navy SEAL, Trigger Matthews, now a special operator with Justin Ballard's Black Knight Security in New Orleans, is teamed with a feisty ex-Marine as part of the protection detail for a Greek tycoon's spoiled daughter. The prickly woman proves to be a challenge he's eager to explore.

Due to her uncanny resemblance to their client's daughter, Cassandra Locke is tasked with being a "decoy bride", a job that sees her going through some matrimonial hoops while fighting her growing attraction for her partner for this operation. Together, they create diversions to make sure the real bride has a chance to prepare for her coming nuptials.
Both loners, and unaware of the fact that they are indeed lonely, Trigger and Cass find out they have many more qualities in common, including an inability to stay away from each other. As the real bride's day draws closer, they learn that she's more than a girl born with a silver spoon in her mouth and find unexpected friendships along the way.
When danger draws nearer, they must trust each other's strengths to get them through it.

Hot SEAL, In His Memory (#30): On Memorial Day, he will stand by her side when she visits her husband's grave, but he wonders if she'll ever see him as anything more than her husband's best friend and the man who accompanied his body home for burial...

Navy SEAL, Chris Bykowski, has done his duty to his best friend's wife by being there to help whenever she or her son needed him. However, now, he has the feeling she wants to put distance between herself and the SEALs who watch over her as the widow of a fallen teammate. Though painful, because he's grown to care for her, he will let her go, knowing she needs closure to move on with her life.

Andi Westall has picked up the pieces of her shattered life after the death of her husband, Ozzie. Although she knows it will be painful to break away from the SEALs who have given her their support, she is ready to cut ties and move on past the painful memories. However, fate has another idea. When she discovers that she may have a stalker, the only person she knows to confide in is Ozzie's best friend, Zig. When Zig and the team rush to the rescue, she finds that accepting their aid and continued friendship isn't as hard as she'd imagined.

While the team works to figure out who is stalking her, Zig insists on sticking close to keep her safe. One night of tearful remembrances ends with her waking up to discover that she wants more from Zig than just his protection. Whether this is love or simply need is something she'll have to figure out before they both get hurt.