Books in audio format
NightKing
Major eBook Releaser
Jul 21st, 2020, 5:57 am
#7712104 by NightKing
Clinton Bush and CIA Conspiracies: From The Boys on the Tracks to Jeffrey Epstein: War on Drugs, Book 4 by Shaun Attwood
Requirements: .MP3 reader, 698 MB
Overview: In the 1980's, George HW Bush imported cocaine to finance an illegal war in Nicaragua. Governor Bill Clinton’s Arkansas state police provided security for the drug drops. For assisting the CIA, the Clinton Crime Family was awarded the White House. The #clintonbodycount continues to this day, with the deceased including Jeffrey Epstein.

This audiobook features harrowing true stories that reveal the insanity of the drug war. A mother receives the worst news about her son. A journalist gets a tip that endangers his life. An unemployed man becomes California’s biggest crack dealer. A DEA agent in Mexico is sacrificed for going after the big players.

The lives of Linda Ives, Gary Webb, Freeway Rick Ross and Kiki Camarena are shattered by brutal experiences. Not all of them will survive.
Genre: Audiobooks > Non-Fiction 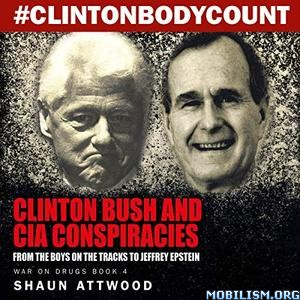