The Ranger by Ace Atkins 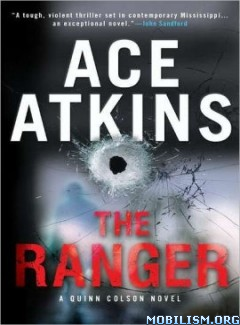 “In Quinn Colson, bestselling author Ace Atkins has created an American hero in a time when we need him.”—C. J. Box

In the days that follow, it’s up to Colson to discover the truth, not only about his uncle, but about his family, his friends, his town, and himself. And once it’s discovered, there’s no going back for this real hero of the Deep South.

Review: Quinn Colson, Army Ranger, Iraq War veteran is returning home for the funeral of his beloved uncle and county sheriff Hampton Beckett. All is not what it seems though when the story of how he died make the way around to Quinn and he starts talking to the buddies and towns folks of Jericho, Mississippi who knew his uncle. Quinn was a modestly troubled youth but always kept his nose clean and took up to the Army when he had the chance. But all is not normal around Jericho, what with a shady County Supervisor and some good for nothing group of folks with bigger and badder connections.

I had a good time reading this book. It reached out to me and gave me a sense of the Southern US in a new light. Some bits of the story-telling were ripe with stories I'd heard from my pops, who used to make his way around Alabama, Louisiana, Mississippi. Small, podunk towns that if you blinked you missed them. Jericho fits that tone. Quinn seems the kind of character who got away from Jericho as quickly as he could but it seemed his uncle was his guiding light and the rock with which he took a liking to, seeing as his father was absent from his life.

“A man does what you do and you got to put up some barriers, some walls. Your uncle had to do the same thing. I know who you were protecting.”

What I really liked about how Ace Atkins drew me into this novel was how I grew to dislike the shady characters, like I knew they were trouble no matter the case or attempts redeem their misgivings. Especially when they're an elected official. Those of us from the South, deeply red (Republican, Conservative) states always hold a grudge. We don't feel like we've ever gotten a fair shake from any politican. Sure enough, its even summed up by Ace:

“I sleep in on Election Day, never figured a single politician to be worth a shit.”

Even in conclusion this novel really took hold and had you till the very end, thanks to the pace and twists around the corner of each chapter. This is an eloquent piece of southern charm.
Jul 10th, 2018, 7:51 pm