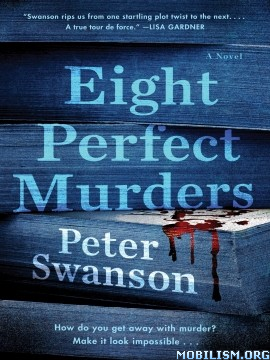 Description: Years ago, bookseller and mystery aficionado Malcolm Kershaw compiled a list of the genre’s most unsolvable murders, those that are almost impossible to crack—which he titled “Eight Perfect Murders”—chosen from among the best of the best including Agatha Christie’s A. B. C. Murders, Patricia Highsmith’s Strangers on a Train, Ira Levin’s Death Trap, A. A. Milne's Red House Mystery, Anthony Berkeley Cox's Malice Aforethought, James M. Cain's Double Indemnity, John D. Macdonald's The Drowner, and Donna Tartt's A Secret History.

But no one is more surprised than Mal, now the owner of the Old Devils Bookstore in Boston when an FBI agent comes knocking on his door one snowy day in February. She’s looking for information about a series of unsolved murders that look eerily similar to the killings on Mal’s old list. And the FBI agent isn’t the only one interested in this bookseller who spends almost every night at home reading. There is a killer, is out there, watching his every move—a diabolical threat who knows way too much about Mal’s personal history, especially the secrets he’s never told anyone, even his recently deceased wife.

To protect himself, Mal begins looking into possible suspects . . . and sees a killer in everyone around him. But Mal doesn’t count on the investigation leaving a trail of death in its wake. Suddenly, a series of shocking twists leave more victims dead—and the noose around Mal’s neck grows so tight he might never escape.

Review: The very first thing that attracted me to read this book was the title: Eight perfect murders. Were they really that perfect? (In a literary sense, of course!) Who was the killer and what was his or her motive/s? Did the number eight have some relevance within the story? I had to read the novel!

Another reason that made me go ahead with my reading was the promise of several plot twists. I must warn you. Despite the promise, plot twists are not necessarily mind-blowing events in a story. Perhaps I had too many expectations after I read the first chapters but I encourage you to give this book a chance and see what you make of it.

If you are fond of books and particularly of murder mysteries this could be the book for you. There is a list that consists of eight perfect murders written in the literary world. Amongst its authors, you will be delighted to find some classics like Agatha Christie, Anthony Berkeley Cox, or A. A. Milne; to name a few. Our protagonist and in theory the author of this book is Malcolm, the co-owner of a bookshop called Old Devils and also the author of this list. Books will be an essential part of the story. The problem? A murderer is replicating the plot of these crimes listed and Malcolm is somehow related to the victims. He needs to find the murderer before he finds himself or his loved ones -- but how will he cope?

I really enjoyed the setting of the story. A snowy place, a cosy old book shop where you can find refuge from the cold weather outside and there is also a lovely cat named Nero that happens to live in the bookshop. The author is always very descriptive so you can easily picture every chapter easily. To sum up, a promising plot.

The thing is, I normally provide some of my favourite quotes in most of my reviews but this time I have to be extremely careful not to reveal any information that could spoil the book for future readers. Most characters tend to develop their theories on who’s done what and it - in detail. Perhaps in some cases going into too much detail in my opinion. It felt as if the author tried to justify pretty much every single thing happening at every moment.

At some point in my reading, I thought there were perhaps too many characters as well. Even if they only had secondary roles or were barely mentioned. I always suspect everyone and to keep a record of each of them was at times exhausting. That is perhaps why I expected a more developed ending (no worries, no spoilers in here). It would be interesting to read what you made of the way the author puts an end to his story.

Since he is the one telling the story he is never wrong as in when he has a feeling about something. However, there are some classic moments where I was like: Why don’t you call the cops? Or an ambulance would be nice!!! Other why-oh-why moments for me were when he decided to help the FBI for free. Maybe that’s how it works, forgive my ignorance. I find some difficulty also understanding the timing for some amorous relationships. There is one towards the end of the story and all I could think of was… NOW, THIS? Perhaps it could be a distraction intended by the author but anyway I would let you be the judge of it.

To me, the resolution to some questions was way too long and not very appealing. All in all, it did not keep me hooked since I easily found myself doing long pauses during my reading time. As I do with most of the mystery novels I read, I went through the book a second time and I think I have found a couple of loopholes in the story but I cannot mention them properly without using some spoilers; therefore, in my opinion, this was not a perfect murder story but it was entertaining enough to save a long weekend.

Now it is all up to you. Do you think there is such a thing as a perfect murder in the literary world? I invite you to read at least the list with the eight masterpieces mentioned and share if you agree with the author.
Nov 30th, 2020, 2:53 pm