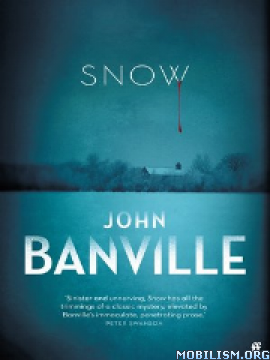 Description: Following the discovery of the corpse of a highly respected parish priest at Ballyglass House - the Co. Wexford family seat of the aristocratic, secretive Osborne family - Detective Inspector St John Strafford is called in from Dublin to investigate. Strafford faces obstruction from all angles but carries on determinedly in his pursuit of the murderer. However, as the snow continues to fall over this ever-expanding mystery, the people of Ballyglass are equally determined to keep their secrets.

Review: Before I write any further word, I must warn interested readers about the fact that some content in the book deals with the sensitive subject of abuse of minors by members of the Irish Catholic church. I see the point of portraying in literature sensitive realities such as this one in order not to forget and not to allow this behaviour to happen ever again.

The first impression, once I had the book on my hands, was that I was about to read a murder-mystery on the snow -- but this book delivers way more than that. Just by taking a look at the index, you will see that there are some time jumps. I am not quite fond of these since I end up getting confused or lost in who did what. But in the case of Snow, the time jumps are presented in a neat and direct way. To be more precise, there is an interlude dedicated to a testimony that seems so realistic it will leave a mark on the reader. One might struggle to carry on with that fragment and you may even need to take a break, definitely my experience, but a couple of hours later I decided to carry on to see where this book was headed. I did not regret my decision.

Snow starts as a classic country-house murder mystery that takes place in the 1950s in Northern Ireland. The State of Ballyglass House is not what it used to be. Decay, a gloomy atmosphere, even the house seems to be haunted or so claims the house's inhabitants, The Osbornes. We have the body of a priest in the library (Father Tom Lawless), a detective investigating (Detective Inspector Strafford, first name St John), some suspects, and it is quite a trip we will experience from such a classic murder scene...

‘Jesus Christ, will you look at this place?’ he wheezed. ‘Next thing Poirot himself will appear on the scene.’ He pronounced it Pworrott.

This is the second book by John Banville I have read; I must say he has a unique way to write mean-spirited characters. The never-on-the-wrong Archbishop displaying his authority and power or a feral man called Fonsey who takes care of the horses - always solitary and minding his own business - are just two of my favourite examples that illustrate how Banville portrays different kinds of evil. Everyone else in the story has reasons or attitudes that make them suspicious or at least partially involved in a perverted universe full of resentment. A universe where most want to maintain appearances at all costs.

I felt immersed in the story not only because I wanted to know who was guilty of the murder. The setting, the plot, the turns, the characters, the pace of the story did not disappoint me. Even in the book's last chapters, when you think all is pretty clear and foreseeable, the author keeps on delivering surprises and twists. So eerie and wintery throughout the story.

The language also is key. Take for instance the title of this novel. Snow is not only the weather chosen to picture this story in a darker tone; there is clear importance to it. 117 references within the text yet well distributed in the story like snowflakes that keep on falling from the sky. The author uses beautiful prose on the subject...

“Outside the window the bare black branches of the trees were laden along their tops with strips of snow that glistened like granulated sugar.”

There is even a quote on this theme taken from James Joyce when our detective says, “Snow is general all over Ireland.” However, this is not the only top literary reference of interest presented. A couple of nice literary references such as quotes from Shakespeare, T.S. Eliot, or Chaucer are exchanged in a discussion about religious divisions.

You will find also interesting dualities such as Catholics and Protestants, the well-to-do and the not-so-lucky ones, Church and State… A depiction of a not so far-in-time society that really makes you think of how some things have changed for good and how others, unfortunately, have not. A rural Ireland in the 1950s that deals with politics, morals, and a society that will not leave you indifferent.

If you like the book you are in luck because Banville has plans for more stories about our dear Detective Inspector Strafford. Not sure when in time but I am certain it will be definitely pleasing to see more stories from the perspective of a character that even after seeing the worst in people he keeps believing in justice.

All in all, a beautifully-written story that will keep you looking for answers till the very last page. Some of my favourite quotes to name just a few:

“The last thing he saw, or seemed to see, was a faint flare of light that yellowed the darkness briefly”.

“He often marvelled at the extremes of discomfort and misery that children were expected to endure without the slightest squeak of protest or complaint”.

“His strongest drive was curiosity, the simple wish to know, to be let in on what was hidden from others. Everything to him had the aspect of a cipher. Life was a mundane mystery, the clues to the solving of which were strewn all about, concealed or, far more fascinatingly, hidden in plain view, for all to see but for him alone to recognise”.

“Yes, he should have been a lawyer. He wasn’t cut out to be a policeman. Too late now to change. He felt at once ridiculously young, a sort of monstrous child, and at the same time hopelessly old”.