citizen4
Major eBook Releaser
Jan 7th, 2021, 6:40 pm
#8240576 by citizen4
The Monster War by Dave Duncan (King's Daggers #1-#3)
Requirements: .ePUB, .MOBI/.AZW reader, 1.1 Mb
Overview: Originally issued as a trilogy, "The King's Daggers" (including volumes Sir Stalwart, The Crooked House and Silvercloak), The Monster War works equally well as a single novel. The story fills a gap in the first Blades novel, The Gilded Chain, when King Ambrose sought to shut down the evil sorcery of the "Elementaries" and the sorcerers fought back by trying to kill him. The same great characters are all here: Ambrose himself, Grand Master, and Blades Durendal, Bandit, and Snake. Appearing for the first time are Sir Stalwart, the only Blade who does not bear a binding scar, and Emerald of the White Sisters, the only girl ever enrolled in Ironhall. The action wanders across Chivial from the White Sisters' headquarters at Oakendown, to Grandon, and into the heart of Ironhall, for the evil penetrates even there. If you missed this one the first time (and most Blades fans did) then here is your chance to join the action as the King's Blades ride again!
Genre: Fiction > Sci-Fi/Fantasy 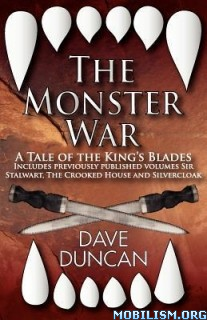 1. Sir Stalwart
Before They Could be Blades... They Were the King's Daggers. Young Stalwart, known as Wart to his fellow students, is expelled from the academy for King's Blades, only to be plunged into a current of breathless intrigue and danger. Together with Emerald, a former White Sister, Wart must survive sorcery, swordplay, ambush, a chimera, a quagmire, and more, "and" uncover a devious plot to assassinate their king...and prove himself worthy of a place among the King's Blades.

2. The Crooked House
In Book Two of the King's Daggers, Sir Stalwart and Emerald set off for an ancient lord's house known as Smealey Hall where they believe the source of evil -- in the form of murder -- lies. Stalwart invites Badger, a surly Blade-in-training, to join them on their journey, and the three must survive harsh terrain, sorcery, swordplay, and the company of a traitor . . . or another day may not dawn for the King's Daggers.

3. Silvercloak
Silvercloak is the third book in the King' s Daggers trilogy, and Duncan has infused this title with all the breathless action and riveting intrigue of the first two titles, as well as the adult Tales of the King' s Blades books published by Eos. The result is a fabulous read for fantasy enthusiasts, who are also sure to be drawn to the embossed, silver-foil cover and by the reputation of this acclaimed writer.