Speculative fiction, alternative worlds, futuristic, supernatural, horror
Dave63
Jan 20th, 2021, 3:09 am
#8277839 by Dave63
The First Clusterf*ck: Zombie Apocalypse by Dawn Peers (Great Bitten #1-#3)
Requirements: ePUB, AZW3 Reader, 1.52 Mb
Overview: Dawn Peers is a UK-based author of fantasy and horror. She also writes under the pen name Warren Fielding. A lifelong reader of most types of fiction, she has always had a passion for writing. Legacy of Darkness is the first book in a fantasy series called The Graces, which Dawn has been trying to write in some guise or another since she was sixteen years old. Now in denial about turning thirty, she plans on bringing the next book in the series out much sooner. Dawn was born in Warwickshire, and now lives in West Sussex. Whilst still enjoying reading, she also spends much of her days telling people to turn their computers off and on again. When she isn't being a professional geek, she is being a casual one. She blogs, reviews, and enjoys mountain biking and running.
Genre: Fiction > Sci-Fi/Fantasy > Zombie Apocalypse 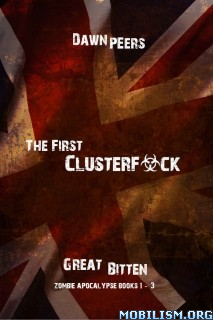 Outbreak (Book 1)
Warren is going to be a hero, whether he wants to or not. Almost overnight the UK is plunged into a virus outbreak that turns the living into deranged cannibals and the dead... aren't dead anymore. Escaping London, Warren can only think to head to his sister - his only living relative. He isn't prepared, and he doesn't have a plan. But he does have a tenacious will to survive. Relucantly, Warren will find himself thrust into a world he didn't think could exist, with responsibilities he never wanted to bear. Fighting zombies as well as humans, the UK needs saving. Does Warren even think the country is worth it?

Survival (Book 2)
A virulent virus of unknown origins has decimated the UK, turning the majority of the population into monsters hungry for human flesh. Through luck and a sheer bloody mindedness to make the right decisions for everyone, Warren has survived. Not everyone has been so lucky, however, and he is now desperate to reunite with his family and find somewhere safe for them all to exist. Warren enters the Community; a collection of organised survivors in a gated safe-haven. They have food and shelter; they are peaceful, amenable, and want to provide protection for everyone. What Warren sees is something too good to be true.
Is he right? Join Warren in the second Great Bitten book as he finds his confidence and footing. Fooled once on the pier, he is not ready to blindly accept authority now. Is the Community really as good for everyone as it claims to be?

Regeneration (Book 3)
The corruption of the Community has been exposed and now they finally think they can have some peace, its inhabitants are told they must leave in order to survive. Heading now for the safety promised them by the remnants of the military, Warren's experiences make him cynical about any place advertising itself as free from conflict. Still, with the support of the international community, and the eyes of the world upon them, the Safe Zone could prove to be all it claims. With a surprise reunion, and Warren and Karen fighting to hide the truth of her pregnancy, the survivors from the south east find it hard to settle. Warren keeps asking questions, and this time, it seems like he's getting some answers. But when he is asked to head back into London, back to where the outbreak started, will one answer be too much for him to handle?