loya
eBook Moderator
May 4th, 2021, 10:14 pm
#8581459 by loya
Lost Amazon by Julie Law (Monster Girl Harem #1)
Requirements: .ePUB, .MOBI/.AZW reader, 506 KB
Overview: Crashing into a strange island after being exiled didn’t make for a thrilled amazon princess, but Lysandra had to make due. Unfortunately for her, between attacks by giant bugs and the strangeness of the place, the island might just prove to be too much of an adventure for her alone.

Then she stumbled upon Mana and Daphne, two obviously magical beings. The first one was a naiad, the other a bunnygirl, and they needed her to help them rescue the rest of their group — the twin catgirls Melita and Melina. 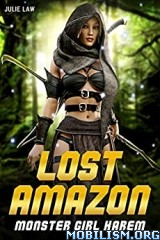