LaPulga10
eBook Moderator
May 9th, 2021, 10:49 pm
#8595014 by LaPulga10
The Gifted series by Cara Covington (#1-3)
Requirements: .ePUB .MOBI Reader | 4.6 MB
Overview: Morgan has been a writer since she was first able to pick up a pen. In the beginning it was a hobby, a way to create a world of her own, and who could resist the allure of that? Then as she grew and matured, life got in the way, as life often does. She got married and had three children, and worked in the field of accounting, for that was the practical thing to do and the children did need to be fed. And all the time she was being practical, she would squirrel herself away on quiet Sunday afternoons, and write.
Genre: Romance Erotic 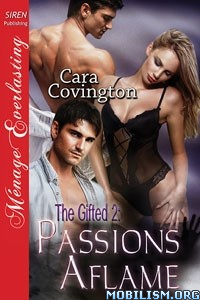 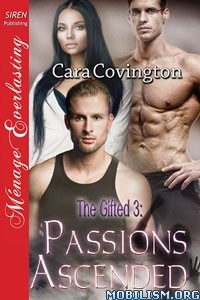 Passions Awakening (#1) The first moment they lay eyes on her on the deck of the cruise ship Max Tanner and Tony Delvecchio are inexorably drawn to Cheri Ambrose. Born of The Gifted, humans possessed of incredible magic, Cheri was sent to New York to fulfill an ancient prophecy, to meet her two destined mates.
Cheri doesn’t have much hope that Max and Tony will fall in love with her. She’s already seen how a lot of people treat plus-sized women, but she can’t help feeling stung when they think she's put a spell on them to compel their attraction—nevermind that it would be in violation of one of two sacred laws.
Two things make Max and Tony rethink their suspicions: they discover they have magic inside of them, too. And there are two other men of power on the ship—men who are determined to do whatever it takes to prevent the prophecy from coming true.

Passions Aflame (#2) Ryan and Jeremy Jones have searched since their teens to understand how, together, they’d been able to make magic happen. As adults they've created and host a television show, Supernaturals Among Us: Yes or No. On their way to a meeting with a medium, they end up in a small southern town and encounter Meghan Clark. The moment they see her they not only want her, they know she holds the answers they crave.
One of The Gifted, Meghan was conned shortly after arriving from the homeland. "Once burned, twice shy" sums her up to a T. Still, she’s looking forward to meeting her forever mates, two men she hopes will love her and accept her as she is. But never in her wildest dreams would she have cast Ryan and Jeremy in those roles.
The men aren’t sure they buy that forever-mate thing, but they sure as hell are determined to keep Meghan safe when two murderous warlocks target their woman.

Passions Ascended (#3) Diana Reynolds can’t believe her destined mates are Logan Firth and Cameron Gilbert. Who are they really, and how did they know to cloak their magic?
Logan and Cameron are true descendants of the Chosen, those Gifted who stayed behind to protect their ungifted brethren—and they’ve been waiting for their mate, it feels like, forever and she’s just as fiery and fierce as they’d hoped. All they have to do is convince her that they really were all meant to be together.
Diana expected to teach two latently gifted men how to use their powers, but she quickly decides having them already at nearly full strength is a good thing when she’s attacked by two warlocks determined not to die at fate’s hands.
And when those two young men quit the field, Diana, Logan, and Cameron know it’s no victory—because there is another power close, one that’s more formidable than any of them ever imagined.