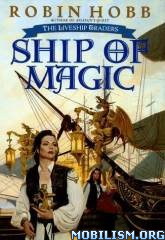 Ship of Magic - #1
Bingtown is a hub of exotic trade and home to a merchant nobility famed for its liveships--rare vessels carved from wizardwood, which ripens magically into sentient awareness. The fortunes of one of Bingtown's oldest families rest on the newly awakened liveship Vivacia.

For Althea Vestrit, the ship is her rightful legacy unjustly denied her--a legacy she will risk anything to reclaim. For Althea's young nephew Wintrow, wrenched from his religious studies and forced to serve aboard ship, Vivacia is a life sentence.

But the fate of the Vestrit family--and the ship--may ultimately lie in the hands of an outsider. The ruthless pirate Kennit seeks a way to seize power over all the denizens of the Pirate Isles...and the first step of his plan requires him to capture his own liveship and bend it to his will....

The Mad Ship - #2
Robin Hobb returns to the sea with Mad Ship, the second book in a projected trilogy set in the same world as her famed Farseer series. Many unresolved questions from Ship of Magic are answered in this tale of sea serpents and dragons; living ships made of wizardwood; the Bingtown Trader families who sail the ships; and their disfigured cousins, the Rain Wild Traders, who build them.

The Vestritt family's liveship, Vivacia, has been taken by Kennit, an ambitious pirate. Captain Haven is a prisoner; his son Wintrow, who bears the Vestritt blood, finds himself competing with Kennit for Vivacia's love as she becomes a pirate ship. Althea Vestritt, in training to become Vivacia's captain, arrives home to discover her beloved ship lost. Brashen Trell, her old friend and shipmate, proposes that they sail to Vivacia's rescue in the liveship Paragon, who has lost two previous crews and is believed mad. Malta, Althea's niece, seeks help from her suitor, the Rain Wild Trader Reyn, whose family is the Vestritt's major creditor. Meanwhile, the sea serpents who follow sailing ships struggle to remember their history and return to their place of transformation.

Ship of Destiny - #3
Robin Hobb concludes her nautical fantasy epic with Ship of Destiny, set in the world of her Farseer series. It lives up to its predecessors, Ship of Magic and Mad Ship in every way: the characters continue to develop, the plot moves swiftly, and the setting is vividly realized.

Again, three generations of Vestrit women are at the heart of the story. Ronica, the matriarch, stands alone against accusations that her family is responsible for the chaos that has overtaken Bingtown. She fights to uncover treachery and maintain the Trader's Council. Her daughter, Althea, sails on the disturbed liveship Paragon, hunting for Vivacia, the Vestrit's liveship, now the flagship of a pirate fleet under Kennit, who is both ruthless and compassionate. Her granddaughter, Malta, has disappeared following an earthquake in the ancient treasure city by the Rain Wild River. Her fiancé, Reyn, and her brother, Selden, are trapped while seeking her.

They are rescued by the dragon Tintaglia, whom they helped liberate. Reyn asks Tintaglia's aid in finding Malta, but Tintaglia has her own urgent mission to accomplish, one which will change everything.

Hobb weaves these plot threads into an exciting and satisfying conclusion. This is an original trilogy well worth reading!

Trouble downloading? Read This.
Jun 8th, 2021, 7:14 pm
If ALL links are dead please send me a PM and I will refresh ASAP.
If you like my releases then Click the THANK YOU button.