For the more serious stuff
StygianIron
Jun 14th, 2021, 4:10 pm
#8696976 by StygianIron
Tank by Jane Perky (Captive Alphas #3)
Requirements: ePUB Reader, 171kb
Overview: Tank, a captive Alpha, has no love for the human organization that enslaved and trained him and his brothers to be killing machines. He gave up on finding a mate long ago and now pours his focus into vengeance. The opportunity finally arises in the form of Toby Crane, the son of a high-ranking enemy, and the last thing Tank expects is to be attracted to Toby. Worse, his broken wolf thinks Toby is his fated mate.

Toby Crane is a man terrified of his own shadow. He’s a survivor of a brutal shifter attack solely because he carries his father’s last name. Toby isn’t like his family—he doesn’t believe humans are the superior race. And he also can’t comprehend why he can’t stay away from Tank, the captive Alpha assigned as his bodyguard. Tank can be hot one moment, cold the next. 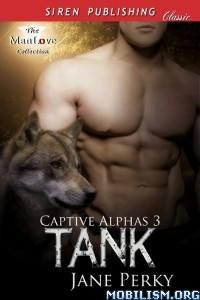